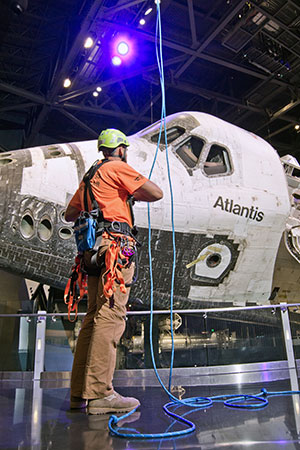 Recently, in a galaxy (not so) far away –in Merritt Island, Florida – Abseilon USA’s team of rope access professionals were tasked with installing new equipment above one of the country’s most prized exhibits: Space Shuttle Atlantis at NASA’s Kennedy Space Center.

To quickly get workers into location and to ensure the seamless execution of the installation, Abseilon Vice President Kenneth Piposar decided to bring in Vidcie’s real-time video technology to maintain visibility into the project from start to finish.

Suspended 176 feet above the historic shuttle, Abseilon workers were equipped with Vidcie Live Video Assist body and helmet mounted cameras, and static Vidcie cameras were set up by Kenneth around the exhibit hall to make sure no angle went unseen.

Although space travel might not be written in all our stars, being at Kennedy Space Center while working above Space Shuttle Atlantis is something that both Vidcie and Abseilon thoroughly enjoyed.

Check out the video clip to see Vidcie and Abseilon in action.