When Disaster Strikes, Real-time Video Streaming Could Save the Day

Just last week, we witnessed a pummeling snow storm that hit much of the East Coast. So big in fact, that the social media world began throwing out names such as #Snowmageddon2015 and #SnowtoriousBIG. 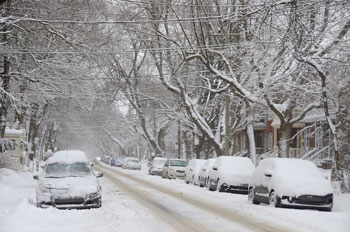 As the storm settled in Massachusetts, like much of the East Coast, witnessed fierce winds creating white-out conditions. Along the coastline south of Boston, the National Guard evacuated residents in the town of Marshfield, a 100 ft. section of seawall was breached by a storm surge that caused extreme flooding in the surrounding area. And the snow? Buffalo, New York, experienced record-breaking snowfall that blanketed much of the city and forced residents and businesses alike to dig themselves out. Streets were empty, and drivers faced zero visibility on the highways.

The bad weather isn’t slowing down as it’s now the Midwest’s turn to experience Mother Nature’s wrath. Like it or not, these storms are inevitable and generally cause way more havoc than most people would prefer, especially for the utilities industry. Power outages, pipes freezing … you name it. These problems can affect millions of people, and at times like this, it becomes a necessity to get things back up and running as quickly as possible.

When the weather outside is frightful, it’s the field service technicians equipped with real-time video streaming who save the day. Eyes set on the broken pipe (or cable box, or burned out transformer), they set out to solve the customer’s problem in the fastest way possible.

But what happens when the tech encounters a situation that they have not run across before? In the past, when encountering a complex problem, the technician’s only option was to phone a subject matter expert back at headquarters. This expert would then listen to what the field service tech was dealing with, and attempt to give the best advice possible – without actually seeing the problem. This often slowed down the field tech’s ability to get things back up and running and, or worse, required a follow-up visit to resolve the issue (not something the customer or field tech wants to deal with when there’s several feet of snow!).

Now, field techs can be equipped with mobile network-enabled wearable cameras that live stream what they’re seeing back to headquarters instantly. They can also be setup to automatically save in video sharing sites like youtube. In addition to that, to get more eyeballs there, you can buy real youtube views here and get more feedback. In the office, experts offer support by viewing the live-streaming video and providing remote assistance to get the job done right — right now. With enterprise-grade real-time video streaming technology, field techs become more efficient, operation costs to the company are lowered and customers are happier to get their utility problems taken care of quickly.

When utilities need to get back up and running in record time, field techs can use live-streaming video to save the day!